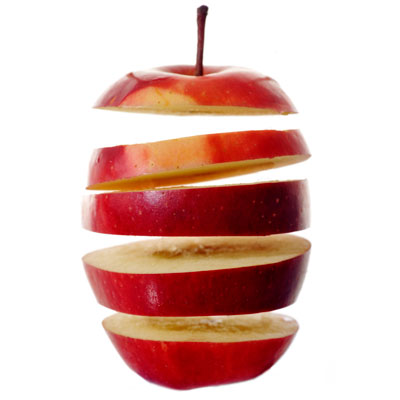 In past blogs, we’ve written about the huge detrimental impact genetically modified foods have on the health of our bodies and the environment.  Today, we would like to inform you of the latest in the line of genetically altered food items approved by the USDA.  Introducing, the “Artic Apple”, an apple that doesn’t brown when you slice it.  No, we’re not kidding.  Surely there are more pressing issues to address!

If you are not familiar with the Center for Food Safety (CFS), we’d like to make you aware of their mission. They are a national non-profit public interest and environmental advocacy organization working to protect human health and the environment by curbing the use of harmful food production technologies and by promoting organic and other forms of sustainable agriculture.  They are basically a consumer “watchdog” agency that lets us know about various food concerns like these genetically engineered (GE) apples.   While it is true that there is an increased risk of exposure to pathogens once an apple is sliced, if we “mask” this sign, it actually leads to more people consuming contaminated apples.  Hence, the term “botox apple” has been coined.  Since the FDA does not perform any independent safety testing of genetically engineered foods, there are, of course, some safety concerns.  How do we know that if we “turn-off” the genes that make apples turn brown when exposed to air, there won’t be unintended consequences?  The truth is we don’t.

As with all other GE products in the United States, there is no mandatory labeling of genetically altered products. What’s so ironic, especially in this particular case, is that the apple industry is in opposition of this product due to the negative impact it could have on organic and non-GE apples through contamination.  Not to mention the negative light it puts on the apple industry’s image in general.  So, the bottom line is – if the apple industry and consumers are not in favor of these GE apples – who is benefiting?  No surprise here, it’s the biotech industry and big food processing companies.

We urge you to let the food companies know that we do not want these apples in our food supply, not only for our own sake, but for the sake of our children and future generations.  Please go to: http://salsa3.salsalabs.com/o/1881/p/dia/action3/common/public/?action_KEY=15648 and sign the petition to reject GE apples.